Recognition of Your 50 Years of Continuous and Faithful Service to Townley Engineering & Manufacturing Co., Inc.

Max Scott’s contributions to the success of Townley Engineering & Manufacturing Co., Inc. over the last 50 years have been enormous. There are not enough words of appreciation that can be written about Max Scott to adequately portray the importance of Max Scott’s association with the Townley Company since he became an employee 50 years ago, on April 7, 1967. Throughout his tenure as a leader in the Townley organization, Max has given of himself to his lifelong work as a living example of the biblical command to us all that “Whatever you do, work at it with all your heart, as working for the Lord …” Colossians 3:23 (NIV) 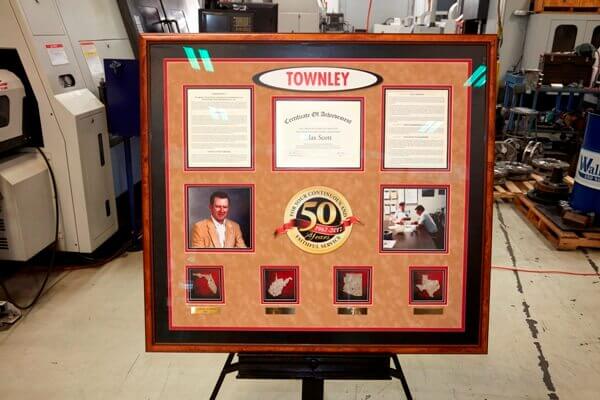 The setting of the stage for Max’s 50 years of service to the Townley Company began in those early years when Max was growing up in the Y&O Coal Camp in Van, West Virginia. As a young man in the 1950’s, Max learned what hard work and dedication were all about. Related by marriage to Jake Townley, later the founder of the Townley Company, both Max and Jake originally worked underground in the same coal mine. Max vividly recalls Jake Townley’s reputation as the best section foreman the Y&O Coal Company ever had. In 1956, Max left the coal fields and joined the Army. Two years later, following his Army discharge and a short stint in West Virginia, Max decided to move to Florida to seek work. After a while, Max encouraged his parents to leave the West Virginia coal fields and move to Ocala.

Max had lost contact with Jake Townley over the years that had passed since the coal mining days, but Max still had contact with Jake’s eldest son, Parnell; and, it was Max who encouraged Parnell to move to Ocala as well to work with Max. Sometime later, Parnell’s mother, Cleo, brother, Tim, and three sisters, Leona, Sarah and Sandra, also moved to Ocala, where they were joined later by Jake and Helen Townley and young son, Toro. It was in East Lake Weir, Florida, in 1963, that Jake Townley began manufacturing polyurethane parts for the mining industry.

Eventually, Max moved from Ocala and took a job with a convenience store chain in Georgia where he managed 12 stores. In 1967, the convenience store company sold its stores in Georgia. Max had been promised an ownership interest in the stores, but the owner reneged on his promise. Max decided to resign and gave his two-week notice. Max called his wife, Jean, and said, “Put the house up for sale, we’re moving back to Florida.” To Max’s surprise, the house sold in 2 hours. Later that day, Jean told Max that Jake Townley had called. “He wants you to call him.”

Jake wanted to hire Max. Max went to Florida at Jake’s invitation that following Sunday and the two met at 6:00 a.m. at the Candler shop where Jake offered Max a job with the Townley Company. Two weeks later, on April 7th, Max started working in the Townley office, but a year later he moved out into the plant area where he learned polyurethane molding and casting, working again with Parnell Townley.

In early 1970, Jake decided to expand outside of Florida and build a plant in Oceana, West Virginia. Max recalls that Jake asked Max if he knew anyone who might want to go to Oceana, West Virginia to manage the Townley Company’s first regional plant. Max, without hesitation, said, “How about me?” The rest is history. Max went to West Virginia, finished construction of the plant and hired some hourly people. Max explains, “We started making parts, set up a good customer base, hired some sales people and got things going quickly.” In two years, Max had established a viable operation in West Virginia, one that showed promise of continued growth of mining companies back in his home state.

In 1972, Max received an unexpected visit from Jake Townley. “Jake came up one day and told me he had purchased five acres of land in Eloy out in Arizona.” Jake said, “I wonder if you would like to go out there and take a look at it.” Max answered Jake with, “Well, I don’t need to go look at it.” Max said, “If you want somebody to go out there, I’ll go.” Soon Max was off to Eloy, Arizona where Max says, “I found some good laborers, some good sales people and the plant took off pretty fast.”

Before Max moved his family to Arizona, he visited his mother in Ocala, Florida. Ruth Scott said, “Max, you’re moving 2,000 miles away to a place you do not know and where no one knows you. I will pray for you every day at 9:00 p.m.” Max then recalls that when he first pulled up to the new Townley building in Eloy, Arizona, he had a visitor. Max said, “The man got out of his car and said, ‘My name is Pastor James Mumme. I’d like to invite you and your family to come to our church.’” That same night, Max called his mother in Florida and said, “Mom, I want you to keep praying for me. I was only here one hour and a preacher came by and said he wants to help me. Keep praying!” Pastor Mumme served as the Townley Eloy Plant Chaplain for years.

Max gives credit to his team in Arizona for the Eloy plant’s great success, including Tommy McNatt, Chet Everhart, Jesse Hernandez, Steve Jordan, Jim Jones and other dedicated people, many of whom continue to be associated with the company today. Max’s reputation as a knowledgeable, innovative and courageous leader continued to grow throughout the Townley Company.

Once again, in 1986, Jake called Max and said, “I need you to help me find a right spot for a new plant in Texas to serve our customers in that area.” Max agreed and, just like he had done in West Virginia and in Arizona, it was not long before Max had the New Summerfield, Texas plant located, built, running and producing quality parts for that region. Max credits early hires, John Brubaker and Tom Ebanez, for much of the new Texas plant’s continued success. In 1990, Max was able to return to the Eloy, Arizona plant. 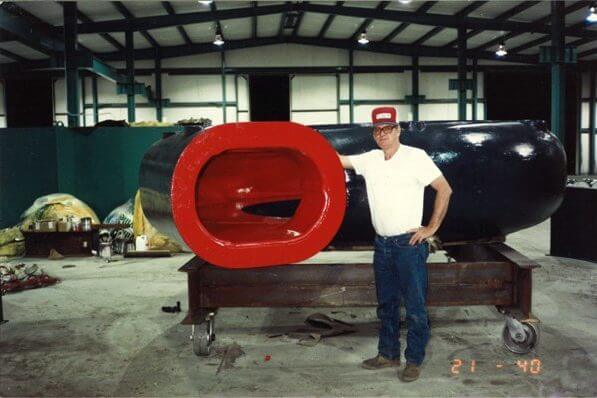 Throughout the years, Max Scott has helped to grow the Townley Company from just a few employees when he joined the organization to a company with many hundreds of employees and manufacturing facilities in six states. Max was always willing to help his fellow plant managers solve production and sales challenges they may have encountered. Max has also trained many Townley people as they sought to absorb his vast wealth of knowledge. It can be said that Max Scott is a true servant leader because he helped others to succeed and he always gave credit to others for the countless Townley Company accomplishments.

It is clear that Max Scott’s loyalty and dedication to Jake Townley never wavered over the years. Max says, “I never met a man with as much determination as Mr. Townley. Max continues, “After Mr. Townley’s passing, Toro Townley has taken the Company far beyond what I had ever imagined.” Max sums up his 50-year tenure by humbly saying, “I have always enjoyed the work I have done and the people I have worked with. In all those years, there was never a day that I woke up that I did not enjoy going to work.”

Toro Townley, President of the Townley Company, says, “Max Scott’s 50-year work history with the Townley Company is an extraordinary achievement. God’s Hand has been evident upon Max, my father and upon all of us as we stepped out on faith to grow this Company. The Townley Company appreciates Max Scott for all that he has done for the benefit of our organization, its employees, customers and the communities we serve. Thank you for your service and may God richly bless you, Max Scott.” 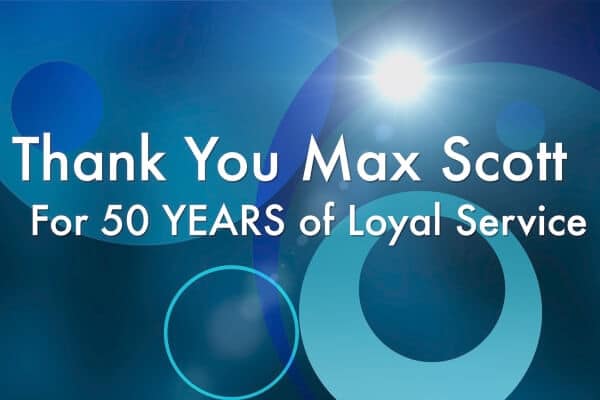